Home » Intel » Sit, Kneel, Bend: Just Leave The Troops Out Of It

Sit, Kneel, Bend: Just Leave The Troops Out Of It Note: This post was published through a different channel in 2017. With the football season back in full swing and the new rage around Nike's use of Kaepernick in their new campaign, I've decided to post it again. I still feel the same. Feel free to leave your thoughts.

“Sit, Kneel, Bend.” For those of us that serve or have served, we’ve heard this refrain hundreds of times whenever a commander or leader brought the unit together. It was to ensure that everyone could see and hear. But for the NFL players, don’t tell me that this time it has nothing to do with the troops.

I really wanted to stay out of this argument but I can’t escape it. On every radio station, plastered all over my social media feed and on every news page, all I see is commentary on the NFL and the players protests during the National Anthem. I’ve tried my best not to care but it’s hard to escape it. And as a veteran, some of my civilian friends are curious my perspective.

First allow me to say, I’ve heard all sides of the argument from veteran groups and there’s generally three factions. Many are outraged at the players and teams. Proof of this is in the significant drop in tv ratings, video’s of burning jersey’s and team apparel and article after article of veteran rants. On another side, active and veteran military members believe that they fought specifically for the rights that these players are exercising. If they choose to sit, kneel, or stand during the anthem or even spit on the flag as it moves past, it is certainly their prerogative. The third perspective comes mostly from those that are still serving, and especially from those deployed. They could care less as there’s significantly larger problems to worry about. They’re spread throughout all corners of the earth either fighting a war or fighting to prevent a war and this takes precedence. They glance at the players kneeling and shrug. What they shake their head at is the amount of attention and outrage coming from everyone with little to no attention being paid to more serious matters.

Generally speaking, I consider myself part of this last group. When I see the kneeling, it may garner an eye roll but recognize that this is the least of things that I should get worked up about. There are a lot more important things going on in my life then to care about whether or not some player that I hardly cared about in the first place took a knee during the National Anthem. And this is how I’ve handled it since Colin Kaepernick took that first knee. If you ask me, people idolize these players too much in the first place. But the kick to the groin comes when the player that took that knee states that his protest has nothing to do with the troops. I would have preferred that you left me out of it.

I joined the US Marine Corps after the events of 9/11. At this time, the people of the United States felt that our livelihood was being threatened by an extremist, Islamic force. Therefore, the call was made to defend the ideals that made this country great. These ideals, to me, revolved mainly around this experiment in democracy and the idea of an individual’s freedom to be who he needed to be and do what he needed to do to create the life he wanted for himself and his family. The National Anthem and the flag itself, to me, represent these values. Therefore, this National Anthem and flag are a symbolic representation of the reason for my service. Simply put, you are protesting a country and flag that represents what I risked my life for…what you asked me to risk my life for…after 9/11. Ipso facto, I feel like you’re protesting my whole purpose in life. You’re protesting me/the troops. 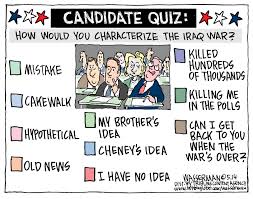 This isn’t the first time that I felt that kick to the groin. The first time was in the midst of a deployment to Iraq during the presidential campaigns at the end of President George W. Bush’s second term. A significant portion of the debate was whether or not we should even be in Iraq. Most candidates stood on their podiums screaming that they knew better than to invade, crowds cheering in return. This was the carefully chosen popular position that would propel them to the presidency. What am I to think standing there filthy in my cammies, rifle slung across my chest with eyes red from exhaustion, when I hear that I should never have been there in the first place; that it was a great mistake? What is my supportive wife and children to think as they stare every night at an empty, dinner table chair, hoping that maybe this year we can have Christmas together as a family? And how did this debate even matter now that we were in the middle of it? And yet the candidates would adamantly state that in spite of this, they stood “behind our troops!” I recall thinking, how can they “stand behind us” when they’re suggesting that this was all a great mistake and we never should have been here? How can they ask us to endure some of the most terrible things known to mankind and just a few years later say that it was a terrible mistake, but then pat us on the back and tell us to keep up the great work?

For the civilians out there that never served, imagine your boss telling you that your vacation is canceled and that the company will require you to stay over the next several weekends to finish a large project. Then halfway through that project, tells you that everything you’ve been asked to do is a huge mistake, that it will amount to nothing and possibly make things worse, and then expect you to continue working through the problem while at the same time saying, “But I support you working these incredibly long hours and missing your kids birthday. Keep it up.” Now imagine if that “project” entailed watching your friends body get shredded in an IED blast whilst getting shot at every day. What an incredible way to “support your troops.”

As I eluded to, the flag represents different things to different people. To some, it is less about “liberty” and more about the “justice” component. In that, with the media constantly portraying signs of injustice, I understand the call to bring attention to what one believes may be a diminishing, critical component in our democracy. And if that’s the case for you, then say so, and then let’s have a healthy debate about the perceived and factual circumstances surrounding such. Once we identify the misperceptions and the realities, then we can all move forward, unified as a country, to tackle what problems we may have uncovered.

At the end of the day, I really don’t care if you protest the National Anthem or our flag. You’re most likely an entitled, ungrateful child that has no idea just how good things are for you compared to those in other countries or even compared to your own American ancestry but that is none of my concern and is simply a product of your own life experience. But do not protest the very thing that you asked me to defend, and then in the same breath tell me that it has nothing to do with me. Now I think you’re full of it.